Jim Corbett National Park, Uttarakhand is one of the most popular tourist destinations in India. Jim Corbett Weather is variable throughout the year, but the average temperature is usually between 20 and 30 degrees Celsius.

The park receives rainfall from the monsoon season, which typically lasts from June to September. The rainfall in the park ranges from 500-700 mm annually.

The park remains closed during monsoon i.e. from Mid-June to October, and the best time to visit is from November to March.

What is the Jim Corbett weather like in Summer?

The Jim Corbett weather in Summer is quite hot and humid. However, the heat is not as intense as it is in other parts of India.

The Summer Months in Jim Corbett are from April to June.

At night, the temperature usually drops to around 20 degrees Celsius.

There is also quite a lot of rainfall during the Summer months in Jim Corbett, so it is important to pack your raincoat with your Summer clothes!

What is the Jim Corbett weather like in winters?

Jim Corbett’s weather in winters is quite pleasant, with temperatures ranging from 5-25 degrees Celsius. The winter mornings are foggy but it clears up as the day follows. However, it can sometimes dip below freezing, especially at night.

The Winter months in Jim Corbett are from November to March and are the best time to visit as the weather is quite pleasant during this time.

What is the Jim Corbett weather like in Monsoon?

During the monsoon season in Jim Corbett National Park, the weather is wet and rainy.

The park remains closed during this time, but the buffer zones(Dhela, Jhirna, Sitabani) are still open to visitors.

Monsoon season in Jim Corbett begins in mid-June and lasts through October.

The rainfall during this time is heavy, and the weather is often cloudy and humid.

However, the monsoon season is also a beautiful time to visit Ramnagar – Jim Corbett National Park, as the lush vegetation and wildlife are truly a sight to behold.

The coldest month in Jim Corbett

The warmest month in Jim Corbett

Between May and June, May is considered to be the warmest because there is low precipitation during this month with only 1,2 days of rain. But In June 72mm to 200mm rainfall can be experienced.

Is there Snow Fall in Jim Corbett?

No, there’s not any visible snowfall like there is in Nainital, but you can see the grassland covered in Snow sometimes during winter, especially in the early mornings of January.

If you like this post about Jim Corbett weather and want to read more such articles then please follow our Blog for more such interesting posts! 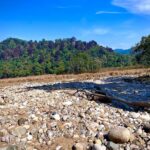